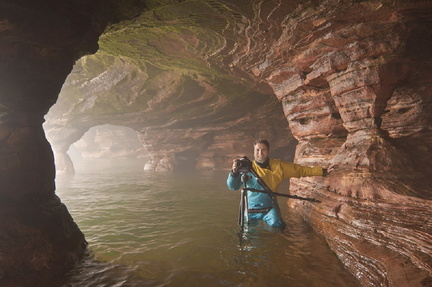 Over 40 years of photographing Lake Superior and the Boundary Waters Canoe Area Wilderness, Craig Blacklock has gained an international reputation for his inspiring landscapes, nudes and technical virtuosity. Photographer/author of seventeen books, Craig is regularly featured in magazines such as American Photo, Fine Art Photo, Shutterbug and Outdoor Photographer. His original prints are in museums, private collections, and health care facilities throughout the U.S. Craig’s background in over 30 years of working in large format shows in his digital images, with precise, exquisite compositions and hyper-real clarity.

Craig is the son of pioneering color nature photographer, Les Blacklock (1921-1995). Craig had the opportunity to accompany his father on photography trips from the time he was three. By age 5, Craig was making his own images along side his dad.

After two years as an art major at the University of Minnesota, Duluth, Craig joined his parents in Blacklock Nature Photography. His first work was aimed at a series of calendars, and in 1979 his first book was published. He did two books jointly with his father, and five together with his first wife, Nadine Blacklock (1953-1998).

Craig’s early career found him traveling over much of the nation, but in 1984 he decided to dedicate most of the rest of his career to photographing the Boundary Waters Canoe Area Wilderness (BWCAW) and Lake Superior. In 1991 he circumnavigated Lake Superior in his kayak as part of the making of his award-winning, best-selling book, The Lake Superior Images, which came out in 1993.

From 1996 through 2002 he photographed his second wife, Honey Blacklock for their book, A Voice Within — The Lake Superior Nudes. Which was featured in American Photo magazine and won an IPPY award as the best photo book by an independent publisher from 1327 publishers around the world.

Shortly after that, Craig switched from 4x5 film cameras to a 35mm digital camera. This re-energized him, as it made many things technically possible that he formerly could only envision. His first (partly) digital publication was Minnesota’s North Shore, which also contained his first video. This lead to his work with the Center for Spirituality and Healing, producing nature videos for stress relief and healing under the title: Wellscapes. These are used in senior homes, health care facilities to bring nature into places where people cannot easily access the real thing.

Craig has taught photography workshops since 1982 for venues such as Palm Beach Photographic Centre, providing guidance in capture, editing and printing. He personally makes all of his own prints in his gallery in Moose Lake, Minnesota. For current lists of workshops, gallery exhibitions and prices, visit blacklockgallery.com

(Sole or co-photographed with either Les Blacklock or Nadine Blacklock)